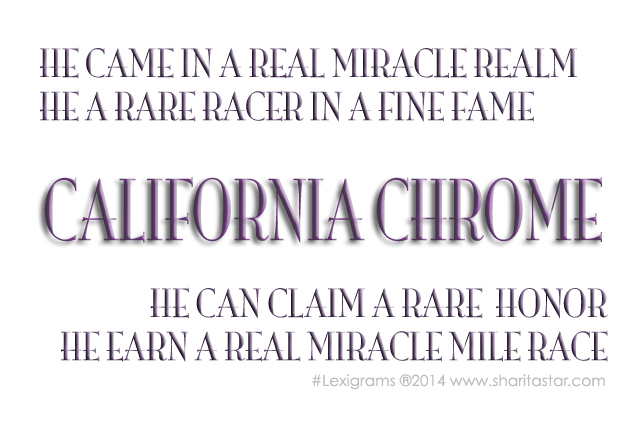 If you are even slightly paying attention to the recent buzz in the horseracing world, you already know there is plenty of excitement poised in this year’s Belmont Stakes on 07 June. Thanks to his wins at the Kentucky Derby and the Preakness, California Chrome stands to make Triple Crown history for the first time in 36 years if he owns up to what it takes to be in the lead one more time.

There is an incredible story behind this Aquarius horse born 18 February 2011, and if he wins at Belmont, the history here becomes all the sweeter for his victory. One of the first horses ever out of the state of California to be a contender for the Triple Crown, there is even more alignment awaiting to be seen in how astrology, numerology and lexigrams add up to how the forecast looks for California Chrome upon 07 June in New York.

If California Chrome were a human, his charts would indicate tremendous athletic abilities. Equally, he is poised to breakthrough the norms of life -as most Aquarius souls choose-  the planetary guidance of Uranus here makes sure all they ever do is original and unique. His karmic path of the 18, equally aligns him in leadership, strength and stamina, due to an exceptional muscular build that the singular 9 (1 + 8 = 9) grants him through the energy of Mars. This planet rules over muscle, motivation and the action it takes to “get things done” in life, and do them quickly. Mars is a sure mover, and known to promote speed.

Like one of the very last horses in history to make Triple Crown history, California Chrome shares some similarities with Secretariat (the 10th horse to ever win it, featured in People in Sports, Chapter 8 of It’s All in the Name). Both horses have a 6 Lifepath, pointing to the life long guidance of grace, agility and the love of harmony in life, including earning dollars in balance as well.  A 6 Lifepath brings the soul ease as it walks through life, as Venus’s influence through the 6 makes sure what transpires, typically turns out harmonious and for the best.

Secretariat also has for a horse, what one would consider “an athlete’s chart” if he were born in human form, born 30 March 1970. Guided by the same planet of Mars through his Sun Sign of Aries, here again is the talent for speed, strength, and muscular tone. He also under his 30 karmic path, had Jupiter’s luck and fortune on his side, which is the other planet that guides some of the most amazing athlete’s carrying this special gift. No surprise either, that a 30, with the singular 3 here, is well known to do many things within the life in the sequence of “three.”

Back to our modern day marvel and the other interesting alignments that California Chrome has which peak numerological interest. His date of birth, is the same birthday as the late sister of his owner, who passed away far too young at the age of 36 from cancer. It’s been 36 years since we’ve had a Triple Crown winner with Affirmed in 1978. There is a theme of 9 here channeling as his karmic path 18, 1 + 8 = 9, and 36 years, 3 + 6 = 9. The 9 is also known as an energy of fame and celebrity, of which the Universe aligns all to take notice of. California Chrome certainly has our attention.

Like humans, any animal also circulates within Personal Year Cycles. Even though he is only the age of 3, California Chrome is now in what is known as a 9 Personal Year, where his fame and celebrity can be seen by the world. On 07 June, he is in a 6 Personal Month, aligning with that harmonious lifepath he journeys along. As May was his 5 Personal Month that ensured he would blossom and be seen by the masses and experience permanent changes, he is right on time within his forecast for fame. 9’s energy always vibes within the 3/6/9 mysteries, and if he wins Saturday at Belmont (since the 11th of Affirmed in 1978) California Chrome will be the 12th horse (1 + 2 = 3) ever to take the Triple Crown.

What is another fascinating astrological pattern to note is how this year’s Triple Crown races all fall upon days when the Moon transits within a leadership sign. There was a recent “big” alignment of these signs known as The Grand Cardinal Cross, as four major planets called to us all to form a new foundation in life across the board to unfold as they all “squared off” at 13 degrees over 20 to 22 April. California Chrome has two natal planets associated with this rare astrological event as his Venus is at 16 degrees Capricorn and his Saturn Retrogrades at 16 degrees Libra. Somehow, the dates of 2014’s Triple Crown races also find themselves woven into this pattern and cycle.

What’s all that really mean? You might be scratching your head thinking right now and wondering who cares and why does it even matter? Well, if you are relating astrology to horseracing -and in this case the running of the Triple Crown races this year, and more importantly how it connects to California Chrome- there are definite indications from these cycles and patterns that history could be made upon 07 June. Not a guarantee for any of your gamblers out there, for the free will of any humans and other factors (such as Mercury Retrograde being on the station 07 June) involved might just throw the odds off. In Aquarius sun sign California Chrome’s case, we sure hope he does break-through in true Water Bearer fashion and overcome any obstacles that might be in his way.

Lexigrams and What’s Really in a Name
Once again as history already proved to us through the name of SECRETARIAT, as we anagram this title and phrase them poetically, we can spell out the truth that indeed he IS A STAR ARIES RACER; IS SET AS A STAR RACER; IS A RARE RACER; CREATES A STIR AS A RACER; IS CAST AS A RAREST STAR RACER ACT. That secretary sure “knew” what she was doing when she named this Aries star.

We find that the “tale within a name” is equally telling as we look to what can be spelled out in truth as we lexigram CALIFORNIA CHROME. With two races down, we already have more clues as to who might make history and achieve what hasn’t been able to be accomplished in horse racing in 36 years.

HE A REAL RARE ANIMAL, HE CAME IN A “NINE” HEIR IN A REAL HARMONIC LINE

HE COME FROM A NORMAL FARM/RANCH IN CHANCE

HE CAN CLAIM A REAL RARE MIRACLE RACE FORMAL HONOR

IN A FINALE RACE HE REACH, CIRCLE IN AN CALM AIR REALM IN FAME

HE EARN IN A REAL RICH INCOME IN LIFE

HE EARN IN AN ORACLE RELIC HEROIC NAME IN AMERICA

The Only “Odd” Cycle to Cause A Change of Plans
What the tricky part here is -the very day of the Belmont Stakes 07 June- our dear old planet Messenger of movement will be stationed and we will have just begun 2014’s second Mercury Retrograde “backtracking” transit earlier on Saturday at 7:56am EDT. One can only hope that this typical cycle that enjoys causing flux and the need for back up plans to be necessary- will stay out of horse racing history on Saturday.

What would be advised the most to those in the horse racing world at Belmont, is to be well aware of those “MRx glitches” that come from human error. All working parts to make the race happen should be rechecked and even “triple” checked (no pun intended) in this case for safety issues from bridles, saddles to the starting gates mechanisms, being all are art of what will be moving upon 07 June.

Sending peace, calm and clarity to all the anticipation surrounding Saturday’s Belmont Stakes. May this years’ Triple Crown history, and the 12th horse ever to claim it, be written in the stars for this victory to shine.

and a PS… 😉
The BelmontStakes race is considered “The Test of the Champion” as the 3rd leg of the ‘Triple Crown’ which starts with the Kentucky Derby, then the Preakness Stakes. With two of the three already under his belt, hmmm… it is also interesting to note, his name is only missing the P to spell out CHAMPION in truth.

One thought on “California Chrome: Can He Claim A Miracle Mile?”