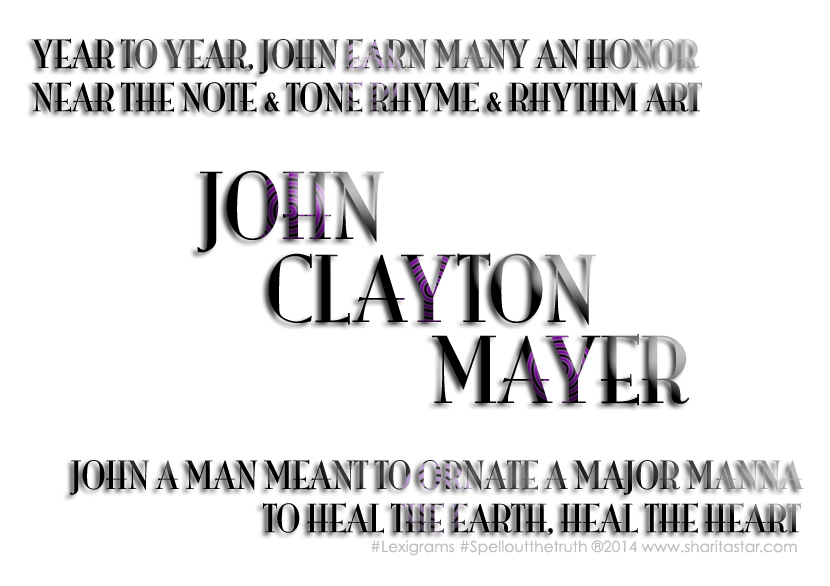 “I see everything coming.” ~John Mayer

More than likely, John Mayer doesn’t even need a forecast for the year ahead being born as a karmic path 16 Libra soul, for when he is still enough, he opens up his own innate intuition to simply listen and know what is coming next.  (As the devoted fan who is more than likely reading this post, the information to follow is really for your heads up.) Nevertheless -aside from a new pair of glasses to physically see all the better- it’s been a powerful last year of permanent change for the famed guitarist and singer songwriter as another chapter of a 5 Current Personal Year in his lifetime now comes to a close.

As numbers and their cycles always promise -after a year of such intense movement and irreversible events that the 5 energy naturally brings- anyone will discover that their 6 Current Personal Year to follow will offer up balance and calm to return to the life. Equally the calling of compassion will beckon after the 5’s inevitable movement stirred up a plenty of seemingly non stop activity to assimilate into their human experience.

As any human will naturally circulate through 9 year spans of time, this current one for John began back in 2009-10, when he was last in a 1 Current Personal Year of brand new beginnings in the space of “if it is new it is for you” – just coming off the thrilling ride of his previous 9 year span cycling from 2000 to 2008. Now as the midway mark just finished of his present one, he cycled through another pivotal point in not only in his career, but his entire life.

This past summer, 27 August 2014 marked two years since John had an operation to heal his vocal chords, something that emerged for him to handle from 2011-12’s 3 Current Personal Year Cycle. We don’t find it much of a numerological “coincidence” that this is also the same date in history one of his mentors STEVIE RAY VAUGHAN, another Libra, and A VERY GREAT GUITARIST, featured in the Musicians Chapter 5 of It’s All in the Name, transited from this realm in 1990.

During John’s last 3 Personal Year Cycle -as it brought the new seeds planted within his 1 Personal Year to see their growth- equally cast off matters to handle concerning his sense of body, mind and spirit. With Saturn -the planet of restriction and responsibility- equally at the time astrologically transiting through the tail end of Mayer’s Libra Sun Sign, August 2012 was when our karmic adjustor was literally conjunct his 22 degree Libra Sun. Saturn’s transit in Libra from Autumn 2010 to Autumn 2012 certainly asked him to slow down and take a good look at what really mattered in his life all around, especially with his health.

As Mayer is now evolving through his 30’s he is only a mere 5 years into the 2nd Period Cycle of his life, which will run until he turns 58. All his immense talent we saw emerge prior to him turning 32 during his 1st Period Cycle via numerology, truly, was John only figuring it all out through his own journey of learning and self-discovery. As his stars see it, we still haven’t seen the best of John Mayer yet.

He should be completely congratulated for surviving past his first natal Saturn Return (28-30yrs of age) as most musicians of his fame and stature from such a young age fail to even have the privilege of seeing life beyond 30. One of the most important things that his freewill did was choose to deny the typical musician route of excessive drugs and alcohol. It could be a distinct possibility had he over-indulged as a 16 karmic path, he might not even be alive today, for the 16 energy has highly addictive tendencies and needs to carefully monitor anything altering one’s natural state of being.

There is so much more to come in what John will continue to show the world during his 2nd Period Cycle of his life as he’ll blossom even more of the truth of what his soul came here to do. One should not wonder why we have seen his styles change up and differ in the newer music he has been producing since 2009. This current 9 year span of time that will conclude for Mayer in 2017-18, is asking him to play that hermit role throughout it to discover more of what his creative talents and abilities are really all about as much as he can, diving him further into that loner role so he can process through a reinvention of himself.

Undoubtedly while John will still continue to enchant the masses, he will continue to like to honor his privacy when he needs to. We already know how he can relate the romantic side of what true love ideally can look like as we have seen in his music throughout the years, which will mature into a different space soon enough as well. On the cynical side of the 16/7 karmic path energy he is born to, he has gotten into a slight trouble and controversy when it comes to talking about his personal past intimate relationships in their aftermath. We’d forecast if John stopped seeking celebrity romantic adventures, he would have far greater success with a significant other.

So what is next in the stars for John? Well, in a 6 Personal Year, one is actually favored for aligning in the right relationship, or at least seeking the understanding to feel that need to settle down a bit on some level. Equally, one finds people in the same numerological vibration around them. One relationship he has already teamed up with musically is with legend Barbara Streisand (bdate 24 April, a 24/6 karmic path energy) with a hot new duet on her latest CD, Partners, covering the romantic classic Come Rain or Come Shine. 6 Personal Years equally allow one to consider the value of everything going on in their lives, and there are plenty of things we will all start to see differently in John’s approaches to his life. More than likely, the year ahead is going to be one of his best yet for channeling his own innate harmony, in his personal life and the within music he will continue to discover.

All is working John toward the true harvest year of all he started back in 2009-10, which will be reaped in full by 2016-17. While one might not think there is much more a person could achieve, there surely is a richer recognition and reward for John on the way than he has already attained. Perhaps by the 8 Current Personal Year in his life that starts in 2017 –being it promises important connections to be part of his harvest- he’ll see that there is the right person standing beside him who will resonate with him for the rest of time.

John equally has powerful astrological transits occurring from aspects in his birth chart, as this current month of October activated a ton of energy over his natal Moon and Neptune conjunct in Sagittarius with the recent Grand Fire Trine that met up in Aries, Leo and Sagittarius between Uranus, Jupiter and Mars. The Lunar Eclipse 08 October in Aries also brought quite a release to open up his mind to a plenty of new ways to communicate what musically channels from him so innately. We may all think we’ve already seen the best of John, but this recent alignment activates some true motivation, triggering unexpected creative brainstorms that probably are more than surprising him as he discovers them.

If one considers the mass affect John has already had upon this world, it is fairly safe to say he has certainly healed countless people’s hearts on the earth through the music he creates. For a 16 karmic path, this is part of the critical role and calling they are meant to play within their purpose of life, that of a healer. John also follows as a Libra 16 born in 1977, a 32/5 Lifepath of Communication –one that promises the person will walk the “yellow brick road of life” by reaching humanity on a profound level- so we also shouldn’t be very surprised he has already seen intense success. One thing we can count on, there are many more years of hearts on the earth being healed by John Mayer to follow.

Aside from how astrology and numerology give two big thumbs up at John Mayer, it is the very name he was born to that equally tells us why he is here in this life doing exactly what he is doing. By the way, the move to the new house in Montana John is an extremely intuitive one. You’ll probably write some of the best music you are meant to ever create there- and wear white when you do it- it is a color you vibrate extremely well in as a 16/7 energy.  As we look to Lexigrams, and take the very letters that compose, JOHN CLAYTON MAYER, we find by phrasing the anagrams we can derive like poetry or prose, we can, absolutely spell out the truth.

YEAR TO YEAR, JOHN MEANT TO EARN MANY AN HONOR NEAR THE NOTE & TONE, RHYME & RHYTHM ART

JOHN CAN CHARM, ROMANCE MANY NEAR A REAL NOTE & TONE HEALER ROLE ON THE EARTH

LATER ON, JOHN TO LEARN THE REAL CLEAR NORMAL ROMANCE HE ONLY MEANT TO HONOR

JOHN AN ORACLE, A REAL MENTOR TO REACH, TO TEACH MANY ON THE EARTH

JOHN RELAY A CALM & COOL REALM ON ANY CAMERA

JOHN CAN HEAL, CAN CLEAR A MENTAL ACHE REACT

JOHN A MAN MEANT TO ORNATE A MAJOR MANNA TO HEAL THE EARTH, HEAL THE HEART

Wishing you an absolutely soulful and stellar year of peace ahead John as you continue to ENJOY YOUR JOY along the JOURNEY.

Happy, Happy Birthday and a very “Happy New Year” to You.