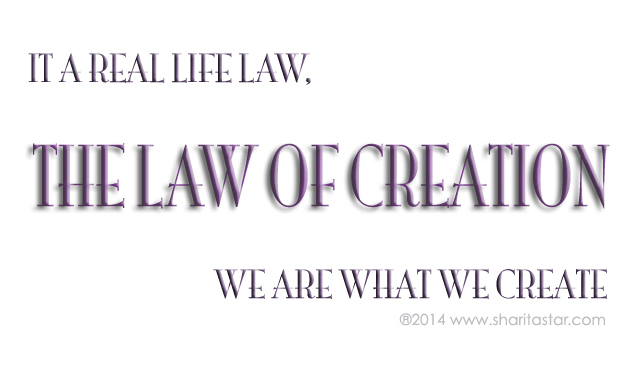 If you are a regular follower of our monthly Word Ponder, you’ll have innately grasped from August how to begin to utilize the law of attraction within your life and tap into the wonders of how the practice of manifestation does this over September. By now, you may have already started to deeply understand that you are opening up your ability to see how THE LAW OF CREATION is the actual way anything you manifest becomes your reality. No doubt -if you really comprehend that you are the creator of your experiences, being the captain who should be steering your own ship- we thought why not wonder and ponder what these words together can really share with us all.

When we examine the Name Expression of THE LAW OF CREATION -which is the numerological energy that is always behind it through the values of the letters that compose it- we find it has, as numbers always will provide, the very key points to know what to exactly do within the action of it. One should not be surprised it is guided by -and we know by no Universal “coincidence” here- the very same Name Expression that ‘manifestation’ has, of the 13’s Regeneration – Change Chaldean Karmic Mystery.

So, whenever you are operating in ‘the law of creation’ or in the action of manifestation, you are being asked to breakthrough the old norm, find new and original ideas within your mind, and go with the flow of the unexpected journey that will unfold within either of these processes. There is a stroke of genius that comes with the 13’s energy, and when we recognize it is thinking outside of the box that has to occur in order to create and manifest within our lives for ultimate success, we find a power to unleash that can serve our individual soul. Remember, cast off that worn out and silly superstition about the 13 being “unlucky,” for the ancient’s saw an innate way this number is meant to be understood.

Said the Chaldeans of the 13: “13 is not an unlucky number, as many people believe. The ancients claimed that “he who understands how to use the number 13 will be given power and dominion.” The symbol of the 13 is a skeleton, or death, with a scythe, reaping down men in a field of new-grown grass, where young faces and heads appear to be thrusting through the ground and emerging on all sides. 13 is a number of upheaval, so that new ground may be broken. It’s associated with power, which, if used for selfish purposes, will bring destruction upon itself. There is a warning of the unknown and the unexpected. Adapting to change gracefully will bring out the strength of the 13 vibration, and decrease any potential for the negative. 13 is associated with genius- also with explorers, breaking the orthodox and new discoveries of all kinds.”

When one is on the true path of operating in the law of creation to manifest success in life, there is an individual and personal discovery that awakens an extreme power. When the habit of dominion has been implemented, the new ground will magnificently emerge. By allowing the free-will to take up in the response verses the react to whatever challenges arise- changes are no longer perceived from the perspective of fear, but of control, that which comes from tapping into your personal power. Whatever unexpected action is part of the human experience, it is the 13/4’s knowing that a strength begins to pour into the aware spiritual being. Regeneration is then assimilated into the soul, and here’s where the break-through into new exploration in life can be a process that makes the unknown something to anticipate, rather than remain in fear, resisting that change is a natural and healthy part of life.

Back to the 13 and the properties of Uranus with 1 + 3 = 4, as the planetary singular guidance here. The 4 is our Innovator planet, promising the channel of possibilities to flow into the astonishing, extraordinary, diverse, with surprises certainly being part of the outcome when the ego is not involved. When one is engaged in the law of creation, it is always working, whether one is doing it positively or negatively. We even see here, with the further look to the two numbers composing the 13, that it is the self/creation (1) in the act of expression/growth (3) working together to unfold the structure that is going to be the solidarity and foundation (4) that other things can then begin to blossom and change (5) upon later. Should the self/ego (1) get too involved and blow things out of proportion recklessly (3), here’s where the outcome will bring that unexpected chaos (4) instead. Without the law of creation, there is no root system in order to feed the branches that are to bear the harvest of fruits in the future.

One more note about the singular 4. In the ways that it’s energies flow in the different and unforeseen, (yet still being the glue that holds things as one in the sense of becoming the foundation), it has a particular association with the understanding of allowing verses tolerance in our lives. Think of the four sides of anything- there is a natural tension the four pieces hold in order to create the solidarity of the entire structure. Sometimes, this can result in a “boxed in” feeling when gravitating to the negative, and the outcome of feeling cornered or stuck unfolds. Tolerance does this very same thing. It creates an energy that “puts up” with stuff, and while no one may be raging outwards, there is something festering within that doesn’t serve the soul. The opposite comes from the shift to allowing. When we allow, it does not produce negative feelings, only a flow to let the world be, and we be in it as solution seekers. That’s a sure positive channel of the 4 being known to overcome any obstacle that comes their way, rather than remain stuck in resistance to it and let tolerance win.

We also note an extreme karmic tie between the understanding of ‘The Law of Attraction’ and ‘The Law of Creation.’ Remember that the Name Expression behind The LOA is the 17’s The Star of the Magi, and it is guided by the presence of Saturn through the singular 8. It may make one wonder why so many people find it of interest, but soon gravitate to the feelings of Saturn’s restriction when trying to engage within it, and then simply declare, “this doesn’t really work.” There is a huge karmic bond between the 8 and 4 energies, so in the debate of what are we all doing in our human experiences, the terms ‘The Law of Attraction’ verses the ‘The Law of Creation’ are set up to be our teachers either way. Even your own planetary make-up will determine which one you find to be more attuned to your way of being: how your personally channel the 8 and 4 energies in your natal chart will determine your natural response to making up your own mind.

The mysteries of Lexigrams have more evidence to support what the true meaning of THE LAW OF CREATION is when we understand it properly. By taking the very anagrams we can derive from it, and spiral them into poetic phrases, the Lexigram process brings one more piece of the puzzle to place into our mastery of life about what’s really hiding within these words in truth. You’ll remember from August, within THE LAW OF ATTRACTION, is THE LAW OF CREATION. The reality that relates to how to best reap the rewards this gift of words wishes for us all to master in our human experiences, is as always, ready to be spelled out from the very letters that compose it.

THE LAW OF CREATION

IT A REAL LIFE LAW, WE ARE WHAT WE CREATE

CAN I TRAIN A NEW TRAIL TO FLOW IN, TO CRAFT IN LIFE?

IF I CAN LET IT FLOW IN A NEW TRAIL, I CAN CREATE LIFE IN REAL HEART

WHEN I CREATE OFTEN, I FLOW IN A REAL EARTH HEAL I CAN TEACH TO ANOTHER

IF I TOLERATE IT IN A TOLERANCE IN HATE, I CAN NOT ALLOW A FREE LIFE IN A REAL CREATE

IT A REAL LAW IF I NEAR TOLERATION IN LIFE, I FAIL, I CAN NOT CREATE A FREE LIFE FEEL

IT IS REAL LAW IF I ALLOW IT TO FLOW IN LIFE, IT CERTAIN I CAN CREATE IN A REAL CLEAN CLEAR CONTROL IN CENTER

IF AN ALTERATION FLOW IN, I CAN CREATE A NEW LIFE FORCE IN A FREE FEEL

OFTEN I FLOW IN FERTILE REFLECTION, TO RELOCATE A WORN ANCHOR I TOLERATE

HEAR IT, THE THIRTEEN HERE, THAT RELATE NEW LIFE WE CREATE IN ONE LAW WE WATCH

IT A REAL FACT: WE ARE IN AN ETERNAL RELIANCE TO WHAT WE CREATE TO OWN REAL WEALTH NOW IN A FREE HEART, TO WIN ON THE EARTH IN A REAL HEAL WE CAN ENFORCE

Learn more about The Law of Creation!