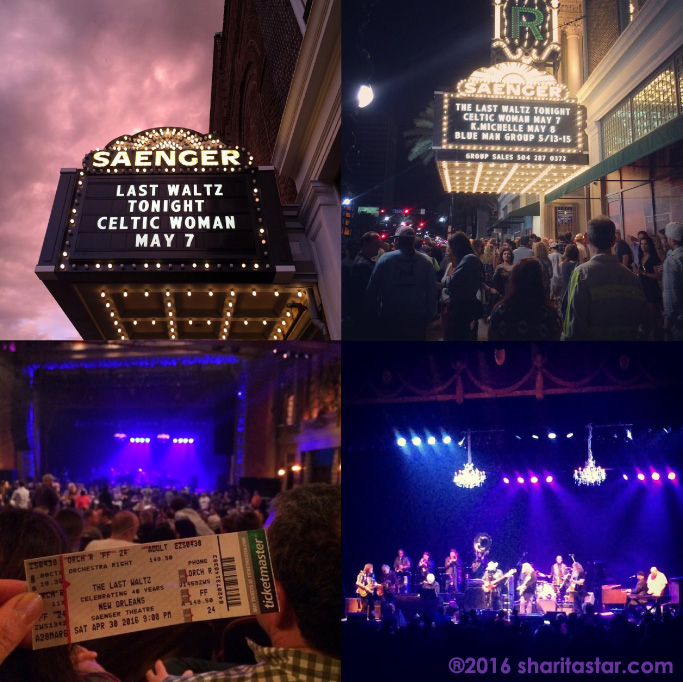 When Warren Hayes announced he was pioneering a 40th Anniversary concert celebration of The Last Waltz New Orleans, many people asked, why is he choosing to do this at the close of April and not in November of 2016?

Aside from this epic event that put the icing on the cake for 2016’s Jazzfest in New Orleans, let’s find out why by utilizing astrology and how very much “timing is everything.”

As we look back to the evening of 25 November 1976 of The Last Waltz at The Winterland Ballroom in San Francisco, astrology is able to cast a chart –just like a human being- for the event. 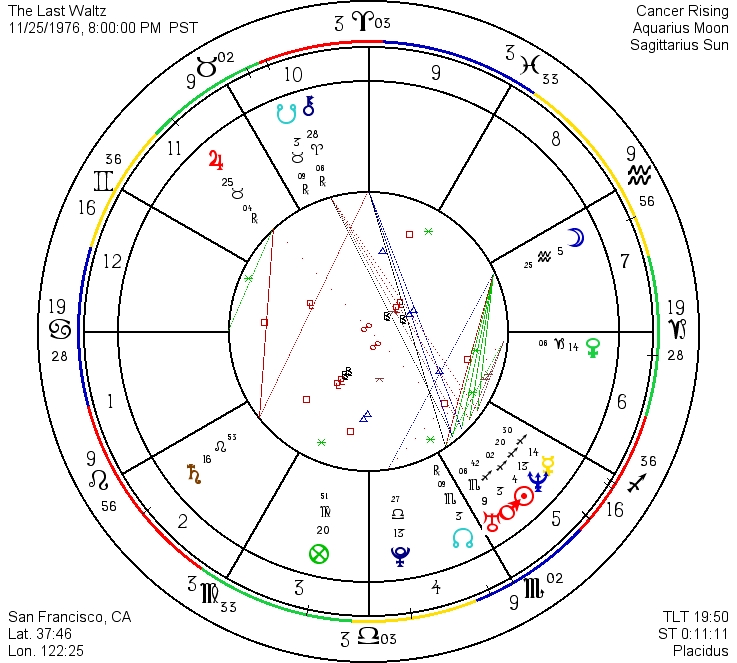 Area #5 (5th House) piece of the pie in the natal chart is the events’ creativity and abilities to be seen on the stage of life. We see quite a line up of planets here that are all positioned here. Uranus (originality/individuality), Mars (fame/celebrity/motivation), The Sun (creativity/identity/character) Neptune (intuition/music/performance/arts) & Mercury (communication/mindset/movement).

With all this natural 5th house energy placed in Scorpio and Sagittarius for the original The Last Waltz, it is no wonder the phenomenon of this final concert of The Band became the fascination that it did. Scorpio energy favors power, rebirth, and wealth while Sagittarius energizes multi-faceted talents, optimism, celebration and generosity to shine when place in a natal 5th House. The Last Waltz in 1976 was over 4 hours long and its’ cast of talent beyond The Band itself was immense. Indeed, this was simply not your average concert.

For those who are fans of The Band, this last performance had some true staying power beyond the actual night of the event 25 November 1976. Within 2 years, upon 26 April 1978, 17 November Scorpio Sun Martin Scorsese himself released his anticipated and yet still criticized documentary film, The Last Waltz, coined as “the finest of all rock movies.” With a natal Neptune as we see it placed from the night’s natal chart, it was bound to happen that a creative adventure involving film would be made. Neptune guides over the entire film industry as well as artistic pursuits of all kinds.

Astrology is a rich source that always can indicate when timing is everything. As we take the “star map” of The Last Waltz in 1976 and place the current transits in time around it, this is how we determine the forecast for any living soul. This ability is the precise reason why Haynes’s timing for April 2016 was simply the perfect one to celebrate the passing of 40 years.

See how in the outer circle there are two planets in transit in this same 5th House area? These are Saturn (responsibility/wisdom/stability) and Mars (fame/celebrity/motivation), both in current Retrograde motion. Retrogrades in astrology indicate there is a request to honor a cycle of reflection, and go back to what already exists.

Fast forwarding to 2016, true to his own current forecast and timing, we find this musical star in great awareness as the world is completely witnessing The New Beginnings of Warren Haynes. Both cycles of the Mars and Saturn Retrograde are reconnecting with all of the original energy created upon 25 November 1976 at present, and so too, did Haynes innately listen to this calling.

Forever fans of The Band were left in suspense leading up to the evenings of 29 & 30th of April in New Orleans this year. What anyone knew under not only under Mars and Saturn Retrograde, is this would be a 40th Anniversary celebration with “Superstar Surprise Guests” at the historical Saenger Theatre.

To further affirm how late April 2016 was the perfect timing for revisiting this historic concert, a third significant planet happens to be in reflection mode, that of Mercury Retrograde. This transit also favors going back to revisit the past and recreate it. Artistic adventures of all kinds are one of the few things that energetically go extremely well whenever Mercury Retrograde is in effect.

Once again looking to The Last Waltz’s natal chart, we see this energy unfolding from the 11th House, that of its’ groups, friends, hopes, dreams and wishes. Mercury had just started retrograding 28 April, and was conjunct the events’ natal Jupiter here. Back in 1976, this is another reason why The Band was so well supported by fellow musicians in complete abundance for their final epic hurrah upon Thanksgiving Day that year.

So just who would these “Superstar Surprise Guests” be in April of 2016 as we knew reflection was so strong? One might have thought, the epic cast of original The Last Waltz musical greats that are still blessed to be alive such as Eric Clapton, Van Morrison, Neil Diamond, Neil Young, Joni Mitchell, Ronnie Hawkins, Dr. John, EmmyLou Harris and Bob Dylan could have possibly shown up. Even The Band’s surviving members Garth Hudson & Robbie Robertson may also have been part of Haynes celebration.

But you cannot expect an innovative Aries like Warren Haynes to repeat what previously happened exactly the way it already did. Those who where at the Saenger Theatre for The Last Waltz New Orleans, got more than their fair share of superstars to celebrate 40 years since The Band played their last song.

As your author was “born and raised” on Scorsese’s documentary, (due to her parents musical taste in the mid 1970’s), equally, The Doobie Brothers concerts in video were in their same repertoire collection. My favorite superstar surprise guest that brought back more of my own past was a musician who ignited pure and genuine stellar soul while recreating The Band’s music all night long: the marvelous Michael McDonald.

McDonald’s impeccable soulful voice coupled with his ingenious keyboard playing made delightful rekindling magic with The Band’s music all evening long. Definite highlights where as he switched to banjo during “Rag Momma Rag” and poured out a most touching rendition of Neil Young’s “Helpless.”

McDonald continued to rivet the Saenger stage along with the rest of the brilliant 40th Anniversary cast as they brought down the Saenger Theatre house during the encore of “Don’t Do It.”

Warren Haynes certainly delivered a more than gifted tribute to one of rock history’s most celebrated bands through The Last Waltz New Orleans. This was absolutely stunning and perfect timing is everything as the dates of 29-30 April were so undeniably appropriate to return to this past event and bring its’ memories back in to the present.

To many more of your new beginnings to come, Aries Star Warren Haynes. Much Gratitude to you and the all-star cast that gave us all a spectacular night to always remember under these cycles of reflection that ask us to revisit the past and cherish it’s many gifts.