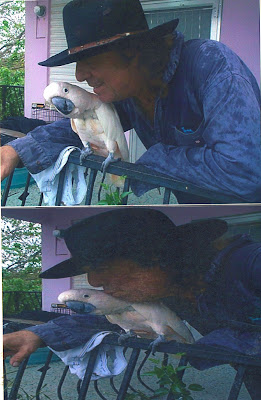 Happy New Year in Spirit to one of the most influential members of my adopted family Gerald Jay Markoe. My life changed completely working with him and Astromusic at INATS (International New Age Trade Show), where I “stumbled upon” a deck of Linda Goodman’s Star Cards, prompting me to return back to NYC and reread Star Signs.  This time around -during my own Saturn Return in my 10th house of Career- I finished her book, and the rest is now history. It is always with A TRUE GREAT TRUE ATTITUDE of GRATITUDE I extend to Dear Jerry for all of his encouragement to me over the years and support to keep at this astrology “thing.”

Jerry was a musical master being born 22 March 1941, the same date as Stephen Sondheim and Andrew Lloyd Weber. While Jerry innately picked up the piano as a toddler, Astromusic began when he started composing one’s personal musical score from the mathematical data the natal birth chart provides, thus translating to us, the sacred geometry it contains through the innate understanding that everything represents vibration in life through sound. Yes, what an absolutely stunning gift!

As time went on, Jerry – on the karmic path of the 22/4 Master Builder and Innovator that he came here to be- developed a new way to listen to timeless classical music with a new age flare. One can never find any 4 karmic path not trying to do things in life their own original way, and coupling that with the Aries pioneering drive, and what Jerry has left us through his Astromusic collection is an eternal gift waiting to heal any soul. Jerry’s passion for music was unsurpassed, as was his enthusiasm for teaching it- leading him to create an entire line of CD’s dedicated to developing a child’s mind properly.

Jerry always encouraged me to keep exploring how numerology could be layered into the astrology, but at the end of the day, he too became fascinated by my ability to Lexigram. We discovered, that indeed they worked quite well when we examined one of his best selling New Age albums, ‘Music of the Angels,’ from Allegro Music in 1995. This was one of the rare times a New Age album had sold over 300,000 copies, which in this genre of music, is like a platinum rock and roll record. And low and behold, what did the phrasing of the anagrams of this popular title reveal!

MUSIC OF THE ANGELS

ITS’ MAIN SALES GO NUTS AS IT IS A GIANT HIT!
THESE TUNES HEAL SOULS EONS ON
THIS ONE IS SO SET TO LAST
LET A SILENT LISTEN HEAL THE SOUL

As Lexigrams always spell out the truth of what’s really in a name, we were not surprised either when we took a look at how the letters in Jerry’s name told us a lot of the tale and mission this lifetime was to hold for him.

Even as Gerald Jay Markoe transited in spirit 12 March 2009, his energy is felt every day upon this earth because of the amazing talent and healing music he innately gifted us all with. The LOVE to EVOLVE that streams from what he created in his lifetime speaks for itself. One of his favorite places was Puerto Rico, where he spent time in retirement (retreating to constantly keep creating more Astromusic releases) with his most beloved birds, Jackie and Jolie. On this anniversary of his Solar Return, it is with fond memories to wish him a most Happy New Year in Spirit Dear Jerry and again extend my heartfelt GREAT TRUE ATTITUDE of GRATITUDE to your legacy. Namaste.