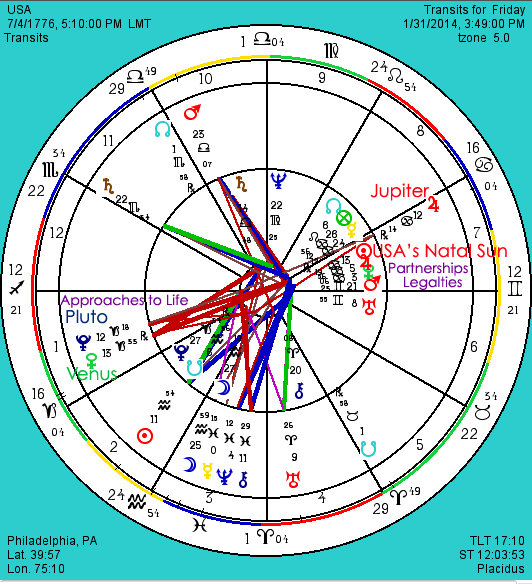 This is the “preview show” of what the USA can expect moving forward as the Grand Cardinal Cross alignment with our Leadership signs occurs over the dates surrounding 22 April 2014.

Center Wheel is the Natal Chart for the USA. Outer is the here and now upon 31 January as Venus is about to go Direct.

Note Jupiter, conjunct now on the USA’s natal Sun at 13 deg Cancer, of which the current transit of Venus and Pluto are in direct opposition of in Capricorn.

Venus has tried her best to bring in the understanding necessary over her review and redo period from 21 December 2013 to 31 January under Returning to Responsibility, Venus Retrograde in Capricorn to what value the USA has to recognize in order to change it’s approaches to life across the board. In the amazingly close quarters to Pluto right now, the death and birthing process is beginning to show itself stronger than ever before.

Venus directly opposes our country’s natal Sun, asking for these new approaches to balance what our relationship is to our partnerships and legalities within what we face as a nation. This 13 degree Capricorn turn around point is the precise one of ‘Regeneration – Change’ that the Grand Cardinal Cross coming over 22 April will also align at within all of our Cardinal Leadership Signs. Said the Chaldeans of the 13:

“13 is not an unlucky number, as many people believe. The ancients claimed that he who understands how to use the number 13 will be given power and dominion. The symbol of the 13 is a skeleton, or death, with a scythe, reaping down men in a field of new-grown grass, where young faces and heads appear to be thrusting through the ground and emerging on all sides. 13 is a number of upheaval, so that new ground may be broken. It’s associated with power, which, if used for selfish purposes, will bring destruction upon itself. There is a warning of the unknown and the unexpected. Adapting to change gracefully will bring out the strength of the 13 vibration, and decrease any potential for he negative. 13 is associated with genius- also with explorers, breaking the orthodox and new discoveries of all kinds.”

As with all vibrations of the 4, what you resist, will persist. Those who rise up and start digging the new earth up for humanities needs will prevail soundly through this upheaval to come. It is profound the calling for selfish behavior to cease, for those who remain within it will see the most intense destruction in history.

Applying this to the political landscape, and it is more than evident why the times ahead in this country will not be the easiest to witness. Remembering to remain centered in your personal space, mission and truly coming from a place of power that is birthed within the state of grace: this is how dominion will be granted to anyone as we move forward within 2014.
Never before in history has there been such a calling to let go of what no longer works, allowing the TRUTH to HURT, and witnessing how much it will set you free.

The USA faces an intense few years ahead, and if we thought the fire was already hot, the blaze is about to burn. However, if I can ever get one point cross that anyone might decide to take into consideration moving forward as a nation it is this: Consider the energy that Lexigrams -the way our words can spell out the truth- is contained within REVOLUTION…

When anyone in the world chooses to stop fighting, complaining, and blaming- and stand up in their human experience as a spiritual being of accountability to truly find the concern to be in solution seeking mode, they will have such a powerful NOW on their hands that they OWN and that my friends, is a victory we all will be guaranteed to have WON.