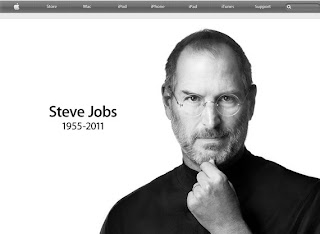 “Remembering that you are going to die is the best way I know to avoid the trap of thinking you have something to lose. You are already naked. There is no reason not to follow your heart. Stay hungry. Stay foolish.”  ~Steve Jobs

There aren’t enough words to express the sadness that the world presently is experiencing upon hearing the news that the man who forever changed humanity’s experience with the computer as well as film and animation, born as Steven Paul Jobs on 24 February 1955, has now crossed over in Spirit.

When one returns to earth to live in the blessings of the karmic path 24 Love – Money – Creativity, under a Pisces Sun, the harmony, balance, and beauty that will emerge from the what the imagination can probe and seek out is definitely meant to be astounding. This blend of Venus and Neptune is able to take minute details and create pleasures that will sooth the soul.

Steve Jobs took his 24 Love –Money – Creativity responsibility to heart. He got creative doing what he loved and did he ever watch the money soon follow, while he equally followed the 28 life path of the 1’s The Initiator. The Chaldean Karmic mystery behind the 28’s The Trusting Lamb did see Jobs in some challenges during his 1st Saturn Return with those he trusted by 1985 with all he began at Apple. Yet, he did not falter in continuing on to swim to greater achievements as he entered his 5 Personal Year of blossoming and permanent changes in 1986 when he acquired Lucas Film Ltd, that soon became the legacy of Pixar Animation Studios.

Steven Paul Jobs granted him the Name Expression that guaranteed he would take his creations to the masses as he worked within his career and public life. As the 14/5’s Movement – Challenge promises: “Magnetic communication with the public through writing, publishing and all media-related matters is associated with the 14. There is a risk involved in depending on the word of those who misrepresent a situation. It’s a mistake to rely on others. Rely on the intuition, the self, the voice within. The luck of the 14 includes money dealings and speculative projects, or betting, but there’s always danger of loss due to wrong advice from others, or over confidence.”

Undoubtedly, in combination with his Pisces soul, Jobs learned well from his experience with Apple at 30 years of age about whom he could trust. He had recognized what value there is in listening to his intuition and as he has been known to say, “always connect the dots from your past.” The continued years of success saw him reap achievement after achievement, because he followed the 14’s formula, alongside his 24 karmic path’s request of doing what he loved.

Known to the world as Steve Jobs, this Name Expression did nothing else but bring him to the Universal Nines. The pure 9 here guided his career and public life in another layer that assured aside from the all of his communication to the masses, he would be constantly motivated, and able to lead himself to a celebrity status. It is blatantly obvious from Apple to Pixar, the level of universal energy Jobs has had upon this world, now forever to be seen as an eternal legacy.

Steven Paul Jobs was certainly seen as the best. In a true Lexigram tribute, we honor the story that his birth name is able to affirm about this more than incredible man of imagination and genius. As we take the anagrams that can be derived from it, what a fabulous story of truth do they tell us about a man that left us far too soon.

STEVEN’S VESSEL, STEVEN’S SOUL SENT TO AN EVEN LOVE TONE AS STEVE EVOLVE

STEVE SENT TO BLESS APPLE TO BE BEST, TO BEAT ALL ELSE

STEVE TO BE AN APPLE BOSS

STEVE’S NOT ABOUT A LOST PAST, STEVE’S ABOUT A JOB STEVE LOVES

STEVE TO BE BEST AT APPLE’S LEAPS

AS STEVE SEES UPSETS, STEVE NOT TO STOP, NOT TO LOSE

STEVE SOLVES AS STEVE VALUES TO BE LOVE

STEVE SENT TO STEP UP TO LOVE TO BE BEST

STEVE LEAVES A LOVE TO USE EONS ON

STEVE SET UP A LOVE SO SOULS USE LOVE EONS ON

STEVE SEEN AS A SOUL TO VALUE, TO SALUTE EONS ON

It goes without saying, how much you will be missed Steve Jobs. But, as true Spirit knows, you are not dead, you have only transferred vessels. Your love will never be forgotten, and most certainly, will never again be replicated.

The Brightest of Blessings to you Dear Steve on your journey home.
Namaste and Much Love to you eons on.