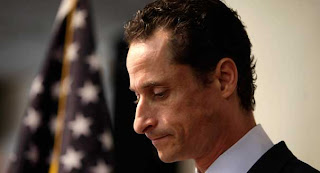 Remember when another politician not so long ago from New York, by the name of ELIOT LAURENCE SPITZER: LET PROSTITUTION RUIN A POLITICAL CAREER?

Here we are again folks. Like New York’s former Governor, who was in a current 7 Personal Year of self-work and “sharpening of the inner saw” when he got exposed, we now find New York’s Senator ANTHONY DAVID WEINER, in the very same 7 Personal Year Cycle. Rather than possibly pay attention to this request from his star secrets, Weiner blissfully choose to go viral anyway with a personal obsession. This is costing him a plenty right before his approaching 8 Personal Year when he was about to harvest some reward and recognition from the previous 7.

While the scandal has been the media’s latest fixation since the story broke in late May, it wasn’t until Wednesday evening upon the 15 June, that 04 September born Virgo native Weiner decided it was best that he resign from office. Why now? Well, aside from those numbers, astrology can also provide some answers here.

Not only did we have a Full Moon upon 15 June, there was a Lunar Eclipse as well, illuminating within the sign of Sagittarius. For any Virgo, this pattern of energy requests for a completion within the home and family life -while in opposition- the Career and Public Life looks to find the necessary balance.

One of the longest Lunar Eclipses in about a decade, its’ affects promise to be all the more intense and strongly felt. Coupled with the Full Moon, the pair kicked off at 24-degrees Sagittarius. Nearby, what is known as the North and South Nodes in current transit, also were at 23-degrees Sagittarius and Gemini, respectively.

The North and South Nodes always, like the natural pull of a Full Moon, present us with an opportunity to create balance within our lives. While these periods are quite long, lasting about 18 months, where the North is in current transit is where an ultimate focus should be applied so clarity can be attained here. Looking to the South, more of a reflective and passive approach should be cast upon this area to bring harmony to what is currently occurring from the North Node’s request.

While we could not verify an actual birth time for Weiner, to examine an exact natal chart, something hints terribly at him having a late degree Scorpio Rising, which could put his natal Virgo Sun in the 10th house of ambition and work. He’s not exactly your typical shy Virgo by any means. (With a natal Leo Moon, he certainly hasn’t minded the spotlight in life.) Scorpio but of course is the sexual and power oriented sign.

Having that Scorpio Rising also could place those North and South Node current transits in opposition to his 2nd house of values/earning power and the 8th of sexuality/transformation. Hmmmmm…. Aside from that current 7 Year of inner work, Saturn would also be requesting the same of him by its’ current transit in Libra.

Diving further into Weiner’s current dilemma, there is some affirming energy as well behind his name. With a 14/5 Name Expression of Movement –Challenge he does have a magnetism that grants him the ability to sway the masses easily within his career. Yet, as the 14 also warns: “There is a risk involved in depending on the word of those who misrepresent a situation. It’s a mistake to rely on others. Rely on the intuition, the self, the voice within. The luck of the 14 includes money dealings and speculative projects, or betting, but there’s always danger of loss due to wrong advice from others, or over confidence.”

By now, it is without question Weiner was just a teeny-weeny bit over confident about his own. What a loss when one should be paying closer attention to their soul and spirit.

Like Spitzer, ANTHONY DAVID WEINER can tell the tale right from the name as Lexigrams are here to lend us more conclusive evidence of their validity. Once again, the anagrams that can be derived from the letters within a name, oddly enough, when phrased together, reveal the truth that has been hiding right in front of us. Happy Healing Anthony, you have until September to accomplish this task now… Your Stars highly recommend you start with the heart.

IN A INNER RENEW YEAR, ANTHONY DO NOT HONE IN ON THE EVEN REWARD
IN A NOTE WORTHY NAIVE TWEET, HE HANDOVER A NATIONWIDE “WONDER”
ANTHONY NOW IN A HOT TWITTER DEVIATION TO DETHRONE
NOT A WORTHY WINNER, ANTHONY NOW HAVE TO END A HONOR
HE IN A WIDE DIVIDE
HE ORIENT IN A WEIRD WANDER YEARN HE DO NOT ORDAIN
HE IN A WEARIED DOWNER TREND VIEWED IN A VAIN AIR
NO ONE VIEW ANTHONY ANY HANDY HERO
WE WONDER ANTHONY, YET WE DON’T WANT TO HAVE ANOTHER HINDER DIVERT IT
ANTHONY DO NOT THRIVE ON “THE WEINER”
ANTHONY: HOWEVER IT RENEW, IT EVIDENT THE HEART WIN THE VOTE